We need to keep a tally of those who shoot themselves in the eye when testing the firing mechanism out..cause you know you will push the button while staring at the rocket.

These guys should be just around the corner

Yep. Feels like it's been a long wait for them.

I'd be down it they were diecast (not gonna happen), but I've no interest in just having smaller versions. For me, it further defeats the point of giant robots. Though I do understand the feeling of folks that have space issues. I struggle with that myself sometimes. Still, for me they gotta be big!

The fact that the scale changed is pretty much thu to ash seing how well 3ago figure sold .

And 3ago being cheaper to make, its easier to put (pilot or Best) without fearing the sell back slash.

To be fair WBR robot is still the same size 25inch previously annouced in 1|12. The only reason behind the line change would be to put an exclusive line in 3ago Like a FlagShip brand and the cost being human figure. 60$ for 1|12 and 50$ for a 1|8. The prototyping is less likely to take long for joint reason.

oh jeeebwush the idea of a 1/12 diecast WBR line is the greatest thing i have thought in i don't know how long... SOLD and SOLD.

Here's a quick question.
With the going prices of 3a toys.. Like Thug at $320.
How does WBRs come out at a hundred Less, but at twice the size.
Are these not the standard material etc, that we've been a custom to with 3a?
Or are these truly like the Shogun warriors of old and made from shampoo bottle material or something.

Its not about the height, but the volume of materials. MARS/Romulus/Remus are made primarily of Vinyl. Joints are relatively simple compared to something as detailed as THUG. Requires less molds and tooling which cuts down on the costs. The first WBR were all purposely priced close to cost to entice more support for a new series

The THUG is made of Vinyl, ABS, and POM. Its a much more complex and layered bot. The design and structure of the bot and the joints require stronger plastics and tooling. Its quite large which doesn't translate well with photos

I'm looking at all my 3a~threezero stuff.
Titanfall, portal, mazinger, real steel, Full Metal ghost, Wwr, popbot etc.
Although some like real steel are lightweight hard plastic and some like wwr stuff is heavier using vinyl, they are all way way less costly , then wbr.
I'm so hoping they aren't light as a feather super thin plastic that feels like it could float in mid air kinda thing.
It just sounds to good to be true. All my other bots are so much more in comparison.
Really want to get behind this line.

I think I'm confused and not terribly sure what you mean. Are you concerned if the WBR bots will be heavy?

The ones I've handled felt similar to holding the Bertie Mk3, just taller, but they were prototypes and the prototypes use a heavier material than the production versions. Maybe someone with the Ghost of Guangzhou can chime in about that

I guess I've just never understood the "it weights more, so it must mean better quality" thing. Doesn't really equate in my mind

As for the toys themselves? I think they're incredibly fun to play with. I had a great time putting them in Sailor Moon poses and shooting rockets at IDW staff 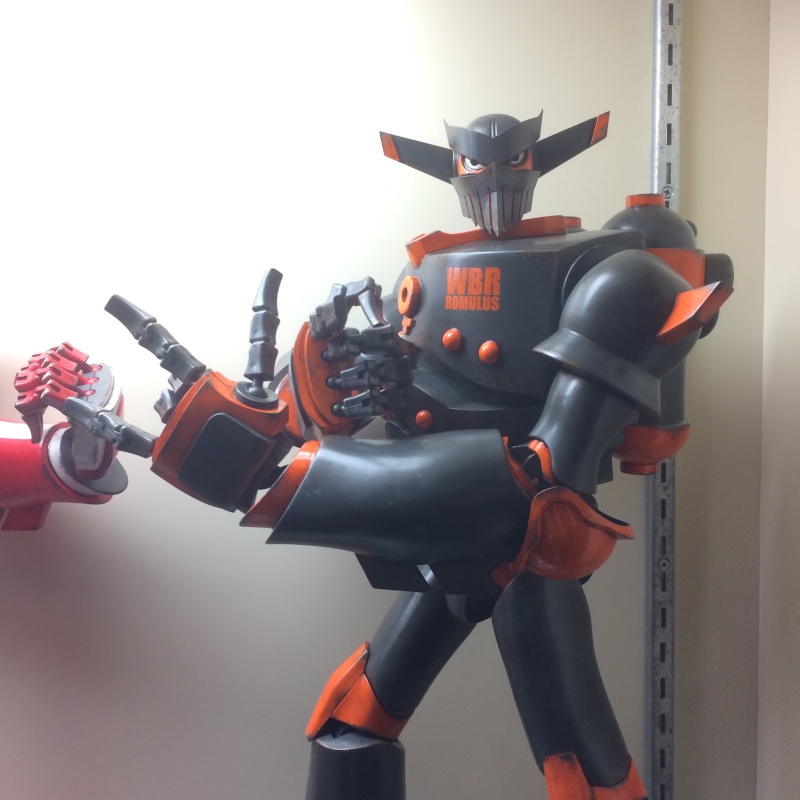 Go over and get them for us Gregory!  We want them bad!

In my estimation, with the bigger bots, the less the weight the better. Just because it means the parts won't warp and sag under their own weight. Thinking about the launcher for the Heavy Brambles, and the canon for the Armstrong, plus the weight of those things on their standing and holding joints. Heck, Large Martin and his ankles and especially knees. With the big bots, tights joints are an imperative, but the less excess weight they have, the better too. Keeps them from turning into a shit show in later life. Don't want them fragile of course, but heavy doesn't exactly mean better either.

^ Agreed - if the plastic or vinyl quality is there and the joints are engineered to hold up for long haul then shed the weight where needed. I feel like I have to give my big bots a "break" every now and then so the stress does not wear them out.

Not trying to be critical, but what did everyone think about the very limited Saturn teaser? I was a bit disappointed to see it seemed to have a base body, though I shouldn't be from the fact that all the other ones had the same. Anyone want to guess what the head will look like? I have to admit, it seemed to have sort of a raised, almost bucket-like shape to me.

Weird. I thought I posted about that here already, and we'd had some discussion about it and his height. Wonder where I put that... I'm losing my mind!

Well duh... I found it.... check out the Saturn thread for Saturn discussion.
As for my mind...

or even exclusive :p

Still on the ship list for this month, so I'm going to hold out hope.

Right there with ya..wanting to see these sooooo bad!

Has Mars been shipped to all customers yet?