What is wrong with this series. It was promised for preorder a full year ago, I've invested and it just keeps getting pushed back. Shame on you IDW.

IDW can't print what they don't have.

Still, why put it on the previews when you have nothing to print

That's common with all comic publishers. Publishers have to solicit x amount of months in advance in order to know how many to print from Pre-orders. Most comics aren't even finished, some haven't even been started outside of a cover and a team being ready for when they go out for solicits. Can't blame IDW for soliciting something they thought they would have had nearly a year ago

T P and I are super excited to start out new ONGOING " THE BEAUTIFUL WAR " in May 2014 published by IDW. Some of you guys have waited years for this, 5 months is a cake walk!


This was posted december 2013.
If I read your comment correctly Ash is not keeping to his schedule. It gets frustrating with all the false promises he makes. And anyone wanting to give the old 'deal with it' comment can just..., yeah!

Anybody else remember the IDW forums, when they announced Pop was going bi-monthly?
Ahhh. Found it. And, you'll note that was 2007. And a familiar name too, probably.
http://boards.idwpublishing.com/3/viewtopic.php?t=2659

he needs an assistant. His mind is just too impulsive for being a proper entrepreneur

Ash is an artist in every sense of the word. I really don't think the title of entrepreneur fits him. I know it would apply seen through the eyes of many who view the world by way of basic economics. I would never dare think I really know his heart of hearts, but as a long time fan, I think Ash has passed the point of being bothered by economics. He's not struggling to feed his family.

He has clawed his way up to the ultimate artistic freedom. He follows his muses and whims, he enjoys it, and hopes others do as well. And like many painters, he is working on many pieces at the same time. He paints a bit on one, sets it aside and starts another, or picks up one from 3 years ago and paints a bit more on it. Something hits a dead end, so he paints that bit out, and chases another way forward. It's very organic. He sticks a toe in one world long enough to play and develop it a bit, and on it goes.

As far as I can tell Ash doesn't work on any one thing front to back. And I think if he had a handler, it would in many ways, change the playful nature of the work. What's frustrating as a fan is that he is so prolific. There is so much of it waiting for him, and so much competing for his attention. It feels like very little of it ever goes anywhere.

And just maybe that's the wrong mindset. Maybe it's more the journey than the destination?

Would an assistant really help out though?. Ash is the one who is creating a big part of the 3A world. There will be a faction that wants him to keep to painting, a faction that will want him to concentrate on the comics, another will probably want him to stick to the toys and so on and so fourth. I don't think an assistant will help out in the actual output. Though I can see where a schedule can help, will that be something any creative person will allow?."Ash, we need more paintings by Friday please and Popbot 9 is due a week after that, have it on my desk by then", that would be hell to me lol.

Although I'm bummed that its taking a while for The Beautiful War to come out. It's pretty evident that he's working on his other branches. By his insta account you would think it was a group of people at the helm seeing as we get updates on toys, painting, comics etc.

I dunno. Its a hobby. I'm not gonna stomp my feet at something I have no control over. He's creating his own world, were just here to play in it. 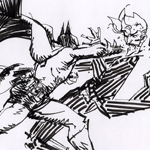 I respect how Ash operates, but his financial supporters should get that respect also. Just by not making public statements you know you can't commit to 99%, would take away all those frustrations for a fan like me. Keeping your promise for something you commit to in business and in relationships is all about having respect and maturity, that's how I was thought & raised. Something that's lacking on those fronts in my opinion.

And let's not kill conversations with deadbeat quotes like 'it's just a hobby', 'deal with it', etc. Let's converse, not debate

One only need to follow his Instagram to realize he has a lot going on. Rarely does he post the same thing from day to day. A lot of irons in the fire for sure. And he does have assistants. Siu, Gregory, Brent, etc. They have all taken on rolls to help with the every day ThreeA business which has helped take the burden off somewhat. But he is still designing, redesigning, approving, and not to mention painting box art when applicable.

I've had the opportunity of working with Ash on the business end a couple times. Both of which involved deadlines. If you look at what he created with the deadlines, well, I don't think you could say the time limit stifled his output. Both pieces were incredible, and you could tell he put a lot into them. Maybe someone just needs to give him a deadline for Beautiful War, and Popbot for that matter. I bet he would listen to T.P.!

I posed the question about Beautiful War to Ryall at the IDW panel during ECCC. He laughed. He did say that when they were in Australia last year for Supernova, they stopped by and Ash had pages all over the place for B.W.

I can understand getting frustrated, sure. But at some point you just have to "deal with it", even laugh. Being a long term Ashley Wood fan is knowing that not every announcement will see the light of day.

This "deal with it" attitude, is a part of why there is so much smack talk towards Ash/3A on FB & KR forum.

I'm pointing at announcements where money has been paid upfront, like the comics or his art. The situation is so different when money is involved. I've also done business with Ash personally, to be honest if I didn't harass him every week for months, yes MONTHS! he still wouldn't have send me the goods after getting a pretty large amount of dineros from me straight up in full. And when I was honoured to get a reply, he was always very friendly in his communications making promises he wouldn't keep. Then at some point my goodwill also stops. Just a little more respect for your client, is that too much to even ask, guess it is.

That's a fairly common issue with many artists, not specifically just Ash. Some are better at it than others. There's nothing wrong with having to email to check up if that's what needs doing. Patience and waiting tends to just goes with playing the art game. Instant gratification seems pretty rare. I've had to do it many times. I'm currently waiting on a commission that is now taking over a year, but I chat with the person on a regular basis.

It's easy to get frustrated because its out of your hands at that point. I've experienced it with some Galleries and Art Dealers when purchasing pieces. Even as the customer or supporter you're at the behest of their time. I've had a fairly well known artist forget to send me a painting after 6 months of waiting and they flat out told me they completely forgot. I've had a well known art dealer take a year to ship me a piece that was paid for up front. Everything eventually arrived which is all that matters in the end. And these are from people that don't have as many coals in the fire like Ash does - like having a large family to take care of and the many number of circumstances that increase with that, a company to run, movie deals in place, several large scale art shows, books and comics to make, and regular travel and convention appearances,.

You do kind of have to "deal with it" and be patient because the other side of things is the artist or gallery or seller/etc make the choice to deal with or not deal with the buyer. Saying deal with it doesn't shut down the conversation, but if the artist or gallery is at a certain point in their career or kind of clientele, and one client is making a stink via whatever means or publicly talking trash online, what's the motivation to continue to work with them? Especially if it ultimately it isn't going to affect the artist/gallery/etc in any way to continue that relationship?

There are few artist received my payment, didn't send the art and ignore my multiple emails. When I was new to the game, it made me very nervous, jumpy and angry at times. Then I thought that I love the art more than I dislike that feeling and the wait.

The best approach (for me personally) is to be patient and consider how much you want the art and dislike the waiting and "ignore" part.

... Got these notifications today:

"Hi,
I sadly have to inform you that the comic you preordered, "BEAUTIFUL WAR #1", has been cancelled by the publisher.
It could be re-solicited at a later date.

"Hi,
I sadly have to inform you that the comic you preordered, "BEAUTIFUL WAR #1 SUBSCRIPTION VAR ", has been cancelled by the publisher.
It could be re-solicited at a later date.

From what I understand they are waiting for Ash to finish the book first and then they'll re-solicit it. Not sure if Ash plans it to come out as a trade or as single issues when it does get re-solicited.
_________________
Instagram

This happens a lot when books are running behind. Especially if you are pre-ordering from one of the big box places, or Amazon. The folks making books submit the solicitation specs for these things a long time before they are published. Sometimes they make the solicitation dates, and often times they don't. They'll get re-listed on those sites again if they are actually getting made.

Thanks for the information, gregory and ESeffinga, will keep the faith!