do enjoy mine and want to know more more bout Von.

he seems so over the top NOM per his talk and the outfit like he is fanboying hard for NOM, tryin way too hard, i imagine him to be more fan than actual NOM on legit mission from supreme....... rolls in with this huge helmet mask with helmet on and large tanks on back, over the top coat and flak vest under with this berite in tow making odd clicking noises like its not exactly functioning properly, strange plan of hidden operatives joining force as the "shitty nine".  just seems so silly compared to previous NOM plans and tactics. fist in the air ranting classic old school villain parody. genius or straight delusional stupid but do like more i think on him. do want to know what happens with the shitty.

have this vague memory bout wanna be NOM type via WWR intel here but its a faded memory and unsure on its validity and if its Von.

LV-426 wrote:
Yeah, he's a great figure. About the corrosion represented in the stitching of the NOM symbol . . . That has meaning, it has to.

Postcard I got was second from the top (left) in the collage . . . Wouldn't mind scoring a Little Shadow in one of these.

it the exact same logo as the one on the tanks, the logo thats intended to look like it was painted on hence the drips.

i honestly think its a indication of how large threeA has grown, no time for individual/unique logos as it would have been in the early days when threeA was this indie like small art company. no time for the small details just slap them logos on even if all the same and ship it out, onto the next money maker.

i can be told its on purpose the same exact drips on all but i aint buyin it, been collecting figures now for most of my life and im no fool or newb to this. if there was a desire to make them unique or to not appearing so lazy it would have been done.

not that thats a bad or good thing just a observation and again i do love my Von.

"tears inside of NOM"
fake jungle death R is breathing* Von inside...

Got mine yesterday..the packaging is fantastic.

So close...
Just opened mine, close to bring one of my favourite figures but the tanks drop him from being 9+ to a 6. I can't honestly believe Ash or anyone signed off on this. I can imagine Ash sitting in his office when someone brings the final sample in and Ash is busy painting or something and doesn't even look up just "yeah, whatever, just send it out".
Personally this year I knew I wouldn't be spending much and so I signed up solely for Von and am very disappointed, unfortunately this seems to be the new 3a way, all about profit.
The reason I gave Von a 6 is because he is shit as is, I'll have to do a fix but really no one should have to fix a $100+ figure. I mean somewhere along production someone should have said something, a simple harness or something could have sorted this out.
Maybe I/we are being too picky but I don't think so, very bad form.

I definitely like the compact packaging, stickers, posters, catalog, postcard.  Less waste of space the better.  Though I think next time stick to a square art box so you can do an internal clam shell instead of this bs bend the figure at the knees stick it in a bag and cram it between two foam sponges and some make shift raffia.

And yes I agree about the tanks.  If the loops were tighter and the tanks didn't slip out of place, I wouldn't have a problem.  But since the tanks don't stay in place, the loops were an ill thought attempt at a solution to hold them in place.

I think I'll try and make something out of styrene to at least keep the tanks together and attach to the flak vest somehow.

Sorry for the crappy pics but I've only just figured this out and wanted to let you guys know as soon as possible.
I've made a huge improvement on VONs tanks. I noticed on the flack jacket there were hooks for the tanks so just under the hooks on the coat I made a small cut (if it went pearshaped I was confident I could cover up with the tanks easily) but then I threaded the tank hook through the hole and into the flack jacket hooks and now they sit securely smooth on his back. A black elastic or wire are needed to hold the bottom of the tanks together but in my opinion he is near perfection. To do this you need to pop the head off (v easy) and I didn't even have to take the jacket off.
The pics don't do this mod justice because it looks so much better in real life. 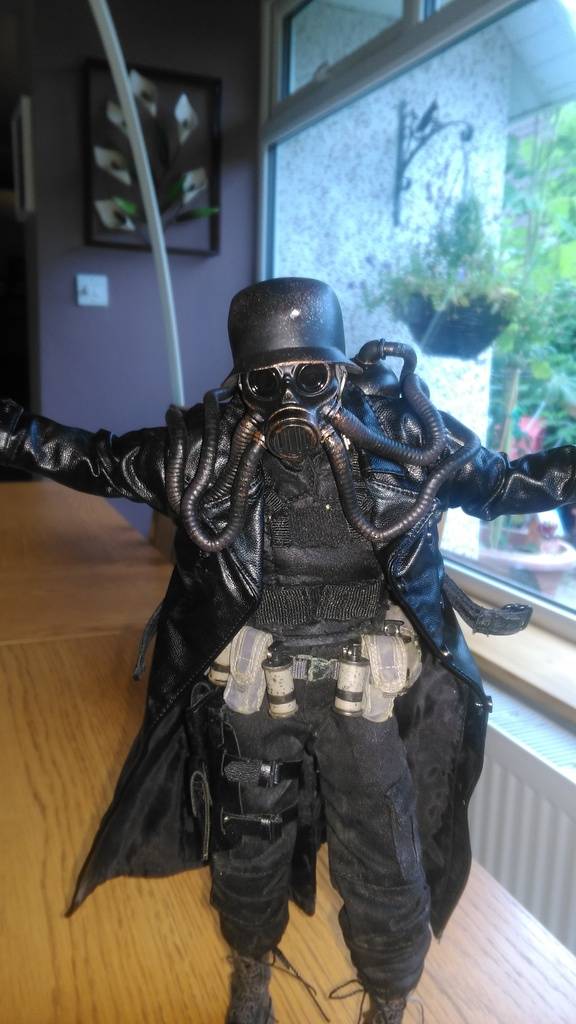 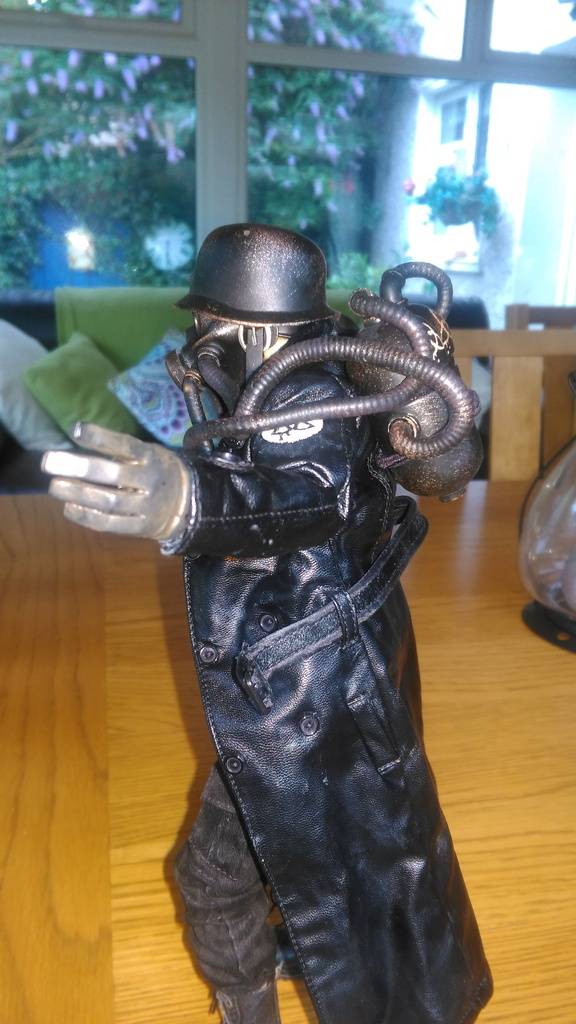 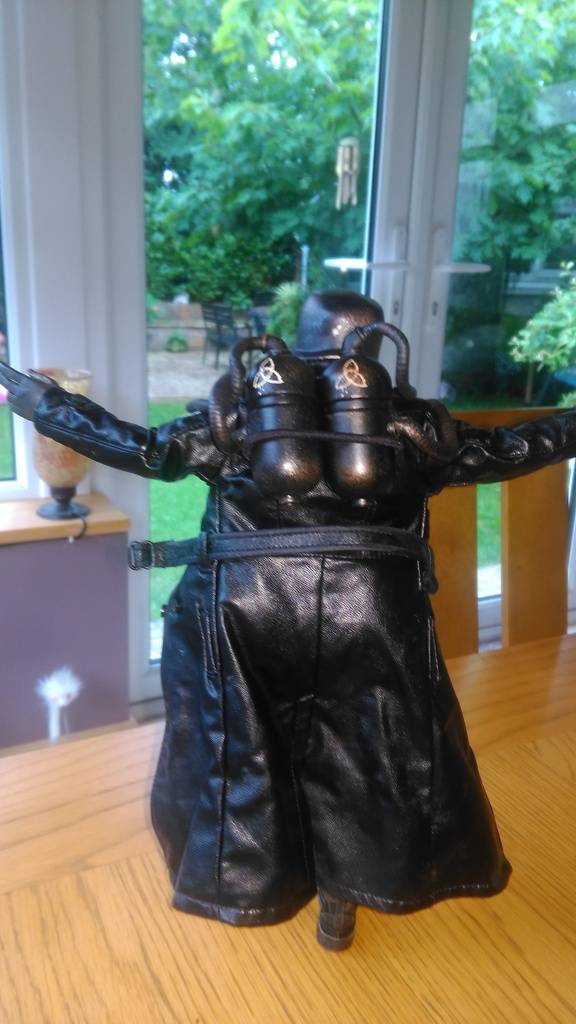 My phone only lets me put one pic in each post but as I said ignore the crappie pics and poses. For me this the way this guy should have been all along.

Oh wow, now I see what you guys were talking about with the copy/paste job on those logos. Wow, that's really lazy... would be pretty embarrassing for anyone calling themselves a graphic designer...

Ohh that's what they were talking about the drips/specks below the logos, I see it now

Edit: and helmet, guess its part of the whole logo, drips included,

The hose and tanks are very awkward to deal with when posing or trying to adjust the jacket. There should have been a way to remove the hoses in my opinion in order to make this design work. I'm not pleased with how it turned out for this reason. Otherwise I do like the overall look of the figure though but can't get past this limitation.

Firehazzard wrote:Ohh that's what they were talking about the drips/specks below the logos, I see it now

to be fair, they reused the same pattern tool, I doubt its any designer fault more an end of the line choose. to save cost.

Honestly I don't see the big deal on the logos. It a design choice. I mean if they would have gone with a clean version on the embroidered one, someone would have complained that it was inconsistent and looked too clean almost like a flower. What is he Fleur de Plume?

It's not a huge deal, but for a company that supposedly prides themselves on design integrity, they did a sloppy copy/paste job instead of taking like 5 minutes in Illustrator to move the drips around and make it actually look realistic (like each logo was painted on by hand and thus had different paint drips). The embroidered logo shouldn't even have drips, so that just looks odd.

Again, it's not a massive problem, but it's a little detail that was completely overlooked. Ash clearly doesn't care about WWR as much as he did 3 years ago, even little things like this wouldn't have met his standards back then. Remember the Krab Labs EvolSquare that had the CRUNCH decals on it's legs even though that's an Iron Panda thing? Same deal, just little bits of laziness here and there...

^^what argent said.
i cant even begin to understand the reasoning behind why it would be ok on a high end collectible not to make those logos unique, as said really wouldn't require much work. just a sign of how much things have changed i think, the focus has shifted.

I dunno guys, I think this is seriously reaching for something to complain about. Especially when you factor in Nom de Plume and the different versions of de Plumes all literally have the toy company logo on their shirts...
_________________
Instagram

gregory im not reaching here, im callin it as it looks to me. thats what frustrates me the most these days. that when a critique in form of a complaint via a paying customer is justified and is mentioned here it its this "oh they are just looking for reason to be negative." mentality.

pls consider they are not and just reacting honestly to the product in hand. threeA isnt perfect for god sake.

the logo was made to look as those it was painted on hence the drips, we can agree on that no? to use that same one back to back on BOTH the tanks, helmet and then again on the patch w/o altering it in any way slightly? thats what happened and to even think it is abit lazy and not cool is someone reaching to complain?

how can you expect to improve products if you cant take constructive criticism w/o throwing out the "oh they are reaching to complain."

kinda expected a eventual response along lines of due to budget reasons had to re-use same logo. but to dismiss complaints as reaching? i cant even yeah...mind blown.

I guess it's a case of different strokes for different folks. The logos never bothered me, I signed up for 3aa solely for this guy and I am very happy with him. Once I fixed the tank issue he jumped up a lot of spaces on my favourite 3a toy list. I'm one of the few but I love the guy, great 3aa set sooo much better than that shitty Lass set but then again I'm mostly a WWR guy.

Well I just got my Von today and I can say that I'm very happy with this figure overall. The packaging is great and the figure itself is nice and solid, with a lot of really great subtle weathering. I won't talk about the tanks seeing that everyone and their mother already has, but I will say that compared to some of my older NOM figures, there is a definite lack of many of the smaller details that make older 3A figures so great. It's the kind of stuff that gives seasoned cynical collectors like me a hard on, because those little insignificant bits are where you can really see the passion of the creator show through.

I like those old Mk1 Squares with the rust lines going down their faces, and the soot built up on their backs from the constant gas fumes. Someone had to sit down and think for a bit about how the environment would erode them - because they're characters that exist in a world, not just toys on a shelf. That's what I'm talking about here.

Von De Plume! I really like how it turned out

Thought you guys would dig these. Not my photos. Pics by zhawanzi. See more cool pics at link.

Looks like Von has a cameo in the next instalment of Battlefield!

These pics are pretty sweet, really like that last one.