Check this out guys!

ThreeA has partnered with artist Geof Darrow to create a line of figures in 2017 based on his series Hard Boiled, Big Guy & Rusty the Robot, and Shaolin Cowboy. The toy company will be handing out posters by Darrow at Comic-Con International: San Diego promoting the line.

"We're very excited to be working with Geof," said ThreeA's Gregory Prout. "Shaolin Cowboy, Nixon, and Big Guy and Rusty will be coming out in 2017 – no time frame as to when exactly, as we want them to be great, because they're characters that are incredible that deserve the care, the stylization, and the attention to detail only ThreeA can produce."

Darrow tells Newsarama that he's been collecting ThreeA's work for some time, and was jealous of what co-founder Ash Wood has done with his Zombies vs. Robots line.

"I collected Ashley Wood’s work and was extremely jealous of what he was doing and accomplishing with Zombies VS. Robots. And when he started producing toys based on his amazing universes I started collecting. My studio is stuffed with THREEA boxes!," said Darrow. "I wanted so bad to have toys made of my characters. I can’t tell you how excited and happy and honored that we are working together. I want them so bad! It’s so cool. I am so lucky!"

Darrow's illustrations are known for their intense and deliberate detail, and Wood says that the "challenge" to produce toys is one of the reasons why the deal was made.

"The detail is an enticing part of the toy challenge," said Wood. "The detail is very important and needed, but Geof’s designs are so strong, they tell a story instantly, the detail is great but it’s really only the garnish on great design!" 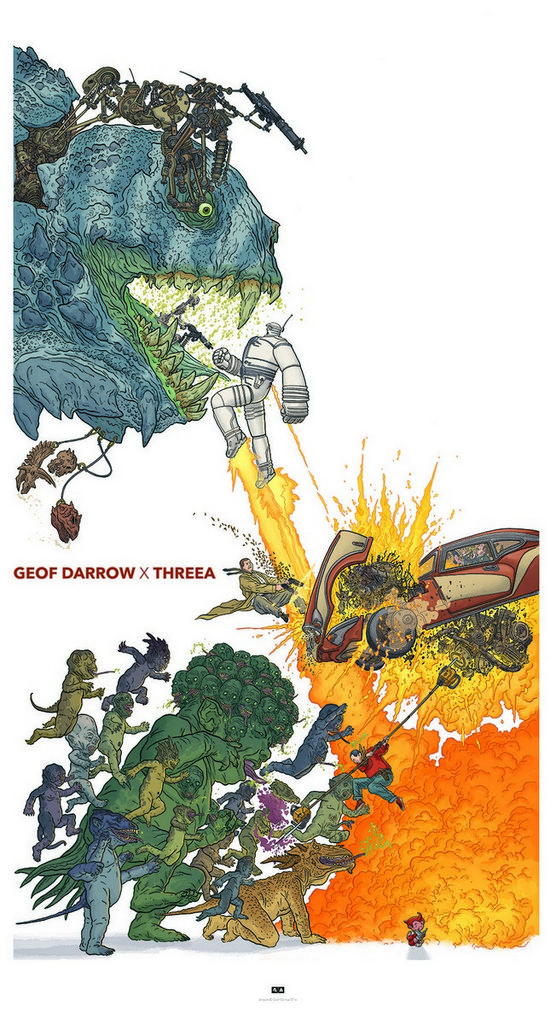 Hard Boiled is the greatest comic ever. I can't believe there will be a Nixon figure!! It's a dream come through...

I agree, a Nixon figure sounds awesome. Hard Boiled is the only Darrow book I have, but every panel is a joy to pore over. I wonder what kind of shape this Nixon figure will be in, pristine or pulverized?

Darrow/3A should make for a pretty epic collaboration, looking forward to it!

A Nixon figure?
I would expect Nixon in several stages of accumulated and lost matter. At least a clean and shredded variant.

Bulldog would be WIN.
For me, I'm excited to see Big Guy & Rusty. I have the toy Dark horse put out back in the 90s downstairs. They are fun, but plastic-y, and I expect 3A will kill on those.

But any of these lines seems like the potential for a great time. So many options, and the accessories.... Darrow loves the little things after all.
What a great announcement.

Cautiously excited.  Still waiting for any news on the Paul Pope collaboration that was supposed to happen this year.  And remember the Jeremy Geddes collaboration?  Never materialized.  Low expectations any of these announced collaborations actually come to pass. I'll believe it when I actually see a figure.

Very excited about this, might even have to return to 3AA 2017!

Geddes collab was put on the back burner many years ago. When he has the time to do it, he'll let us know

Paul Pope stuff is being worked on. Dev on average takes a year. There's quite a few figs on the docket with him, but nothing I can go into detail about
_________________
Instagram

agree with gar... just one clean version would be pointless as the whole comic was about how much punishment Nixon could withstand

I would be very happy with one figure with shredded clothes and three sets of interchangeable heads and arms, with different stages of lost flesh...

I also think a Nixon 2 pack is a cool idea, one with undamaged clothes and skin and one with torn up/bloodied clothes and damaged body, but financially it would probably  make more sense to have one figure with interchangeable parts. Maybe with 2 sets of clothes, or even just 2 coats, that would be a nice touch if it's a single version.

Would also be neat to see a Barbara figure, or even Nixon's robot adversary (don't know her name) what with the 3A's focus on robots. I imagine the focus will be on Nixon though.

By the way, nice selection of images to highlight the progression of Nixon's increasingly destroyed condition, zzzzz! I love the scene at the end where he's basically just a torso and he finally stops fighting.

Always loved his stuff. Sign me up for a Shaolin Cowboy.
Gotta come with the two-chainsaw pole.

is there any update on these items?

I know I will be buying Nixon once that is made. The 1/12 Dredd is amazing and the photos of the 1/6 are spot on. So this is a good license for 3A to take on. I think fans will be very impressed.

They're coming along nicely. Slow process, but there will be news soon

Also agreed. Plus I've still got the BanDai version to keep me entertained until I'm won over.

Wow, that's a lot sooner than I expected.

Looks great and I want one but nervous about pricing...