World of 3A Legion Outpost :: 3A | Toy Discussion :: Transformers

COMING IN 2017
KNOWING IS HALF THE BATTLE 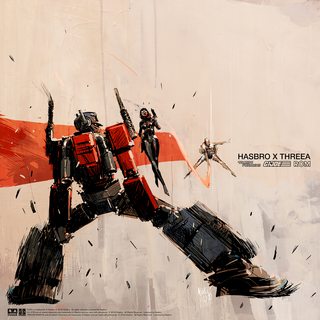 What does it means?

Rom, Which I asked Ash about doing back at the beginning of 3A, but his license was all locked up by Parker Brothers.

But now Hasbro has decided to do a "shared universe" in an attempt to jump the Marvel train (not unlike Universal and their upcoming monster flicks, or really any studio with more than 2 properties to rub together). And since IDW had Transformers, GI Joe and now Rom rights for publishing, and the announcement of some new crossover tales, I'd guess it paved the way for AW to get some ins on the other two lines as well.

I'm just jazzed by the prospect of a new 3A Rom fig more than anything. My old one is wonderful, but oh so stiff. ;


....)plus Bay has transformers film rights, and the recent rumors surrounding the title of that latest film, is that Rom might put in an appearance?!?

1/12 Joes please...I was hoping Mezco would do it but based on Judge Death, i'd be happy to see ThreeA tackle them...sort of ultimate versions, lead with Zartan, Snake Eyes and Storm Shadow, please.

Scarlett, Jinx and Baroness. Those 3 are on my list.

gregory wrote:Joes will be 1/6th and we're focusing mostly on the women characters

Perfect.
Somehow that sounds completely logical to me.

Cobra-La figs would be sweet

not what I was hoping for but cool either way. I'm in. Reckon Baroness, Jinx and Zaranna or Zanya are at the top of my list. Scarlett too.

What if it turns out to be a sack head Snake-Eyes?

But seriously, I'm keeping my eye out for this line.  See what comes of it.  Threea better put up or stick to their own IP.

...so not female focused?

I can share info I'm able to now, or you can argue semantics and wait until next year.

This line will primarily be women character centric. We'll have a few of the main male characters, but the focus is mostly the women of Joe and Cobra. The ratio will be more women than male.
_________________
Instagram

AND THIS I COMMAND

I think it is because the market is saturated with tons of boring male military figures to choose from.
While female figures are a lot less common.
threeA has a beautiful long legged female body which would look fantastic dressed up as one of the female G.I. Joe characters.

But knowing is half the battle.

Too soon to say. Brent and Ash will cook something up cool I'm sure

Will they have heels or actual boots so they can stand? I would prefer my TQ's have flat feet shoes. Looks nicer imo.

World of 3A Legion Outpost :: 3A | Toy Discussion :: Transformers