52toys - one of China Biggest pop toy culture media, had a interview with Ashley Wood at Weta Expo (A future in the Visula Arts Weta Workshop and The world of Dr.grorbots) in Wuzhen China last week, here is the interview by 52toys Editor DarthFo.

There is nothing new for 3A fans, but they talked about what kind of toys Ash liked when he was kid, and what he like most from 3A, why chose Gas mask as symbol element of WWR, and in the end, the future of toy industry.

Chinese report please read the link below.
English scripts is from recording of the interview, I'm not very good in English so it may not 100% accurate. Q1 What kind of toys you liked most when you were kid?
Ash: When I was a kid? hmmm! I like Mego figures, its a 8inch tall mego figure, the ironman… that quite a few, but I like the mego toys… and star wars, that 3.75inch star wars kenner toys

Q2 what about robot?
Ash: I love all the robots, when I was 7 years old I get a Zoid and many more, I still have them, I still collect them, and that large impact (to me).
Just anything Science fiction at that time.
And the old robot toys like [robby the robot] from the [forbidden planet], the robot from the [lost in space].
Q: old sci-fi.
Ash: old sci-fi, but that was young for me. but yes, old sci-fi, and 70s toys, like [Evel Knievel], even [Master of universe]… pretty old, but…I just love toys! if you looked a toy, there is a story in your head.
Even I was a small kind, I looked a toy, and dreamed a story or whats going on.
So that were fascinating old different toys…but mainly science fiction,

Q3:Toys and Drawing, they are 2 different tools, whats they mean to you?
Ash: They are same. We want to creating something - is arts. I see no difference from the the physical form and drawing (or painting), that’s how I express myself. They just different mediums, so as an artist I like to expose myself in various different ways, I regret the toys just as valued…like painting, drawings, sculptures…that why I do it. and it’s really hard work, it’s not financial best thing to do…easily lose money on toys, but its thrill to doing it, when you get your first toy from sample, or where your sculpture has done… you get the feeling inside - like a kid! you feel something. and that’s the why I do it - otherwise I wouldn’t do it. if I couldn’t love it I could do it.

Q4: Do you have any particular standards to tell what is the bad toy or good toy?
Ash: Feeling.
Q: Feeling?
Ash: You just know. Like ThreeA… we developed lots, but they doesn’t all come out, there is many toys we haven’t released… because, you look at them, you are: hummmm? (shaking head) I don’t buy, I do feel it. we know we gonna fail it, you know there is no much difference between us…
You are part of evaluate/equation of yourself, if you love it, you have a same taste level … if I don’t gonna like it, why you gonna like it?
Q: I respect your taste.
Ash: Yes, we just know, people will just tell. you hold it, you get to do that right. and Sometime we do stuff…
someone or Ash：maybe not finish, so like…
It could be better, we should done that, we should done this… or maybe something will happen in production. We are very honest, not everything gonna be right… and Kim always be honest with that…
we look everything here, we be very honest, “that could been better”, “we mass that up.” but in general, you get the feeling when you look that has.

Q5: What is the best reserve for you to establish of threea toys?
Ash: The original Nom De plume? very exciting. yes. but… you know, honestly I think (it’s) Lasstranaut. We finally made Lasstranaut is important to me.
hmmm…
It’s a silly figure which most people don’t care for, very small release and very exciting or it’s about passion toys, you know I like them a lot, you know, to me, we almost nailed the most perfect toy.
you know, everytime I get one, the image I get… that feeling like… you can’t have a favorite of children. you know, I can’t name it, maybe it’s the next one, the one next which I will get the sample from an old design… but, there a few give me that (feeling) I’m doing something right. I keep the TKs, the original TKs, I love them, but you know most people are “hem no” (shaking head), “we don’t like these creepy weed”. but I believed in them and love them. and it came to be very popular.
Sometime when you do something people won’t like it straight away, it come to be a better and popular way, and sometime people really like instantly（knuckle）, and sometime people just…”I like it” I’m over it.
So the TK is the special.
en, I was done so much, try to think them, cutting trough the different toys, the Popbot toy, I’m fan of Popbot toy.
And the Squares, and the Zombies… I love them all.

Q6: Are you going to collaborate with Todd Mcfarlane for the Spawn Toys?
Ash: Todd is one of my great friends of artistic, I use to lived in Arizona for years, so my children were born I stay many days… in his office working with Raven.
If you asking me if I’m making a Spawn toys now…you know if I…
Q: Have a chance to?
Ash: We have a chat. Todd and I talked a lot of things, we love to, I love to (make a toy of Spawn). but in the case, to doing it right - to make a perfect Spawn toy — which means Todd has to been involved in. but as Todd is a busy man… we speak about it, I love to. I worked in Spawn a lot, I designed the Hellspawn, but…maybe … you never know, right? maybe Hellspawn just coming back?

Q7：Which artist you like to cooperate most, in the toy industry?
Ash: Well…Artist? You know, others like toy Artist, like Michael Lau, but I don’t if I want to collaborate… I respect many of them, especially these old HongKong artist, such like Michael Lau, brother 3, and obviously Kim - ThreeZero…but I don’t know if I want to collaborate with these Artist, because they are strong! the Artists I like whom don’t want to collaborate, they like - “I want to do my art!” - As I do. I don’t want to work with someone who just like - “Let’s do it together.” So… I’m big fan of [Paul Pope] - many like [Geof Darrow] - (I like) these people doing toys with, but there no collaboration with, we like “we love your design, we’ll make the toys”, but we won’t collaboration, to me in first - like you are working together with different ideas - No, that doesn’t work. Really good art, Strong art don’t collaborate. They like hit the hits, or one give way to another. but usually collaboration is like bit of this, bit of others…but you know…many of artist like spawn, and lot of HongKong guys… they all at similar age and have similar influences… but, I don’t like the collaborate, I’d love to make them toys, I try to make Michael Lau’s Gardener toys…I’d like a Gardener 8” toys…but, yep…nope, No collaborate.

Q8：You create lots of figures with gas mask, what’s the point of it?
Ash: The gas mask? because it’s creepy. The gas mask is a symbol of war - you see a gas mask, it’s means war. and it hides one’s face - which gives the mystery. and it’s up to the story, you don’t know someone looks like - it’s cooler!
It’s like… I love Judge Dredd! you know Judge Dredd comics? He never take his helmet off, it make him cool to me.
And back to the gas mask, it’s symbolic of war, and it just effective, that’s cool.

Q9 What you think will be the most popular toys in the coming days?
Ash: For everyone?
hmmm
I think going forward it’s going to be original toys, I think license toys are great, but I think the artist are doing their own original works … in the general, you/people alway appreciate people who doing their own (arts)… so, hmmm, if I say someone else they may going to be upset, so, I think going forward I think the toy industry is evolving. like for the old days, we have type of Star Wars toys license people to notice, but others like threea or other toy company to show their own idea…has been to [reserved]… as you guy not done recognized cool stuffs…but it doesn’t to be super heroes, don’t have to be Marvel or DC, and doesn’t have to be a Star Wars, or any movie tie-in, for big support, I think it’s gaining ground. I think the toy fandom getting bigger and smarter, and it is growing.
For younger kids getting involved to be, the fandom where it used to be 20 something…but for now the teenagers now are into… and they are so well educated, that’s good, and they appreciated the designs ideas and styles, it’s more than we did when I was a kid - “stormtroopers! that’s awesome!! I’ll do!”.
I think it’s because of the internet, everyone has a hight of sense of what it’s good, you know what is good, people will react like … it doesn’t have to be like some tie-in something to be appreciated.
I think toys kind like music, people appreciate the originality… these people who been themselves. they don’t necessarily to be the popular music played on MTV - which really popular. and people kind of like the underground bands, or music made by people who has passion about it- they are not doing that just about selling toys on Toys"R"Us.
I think that’s what the future of toys is. 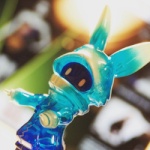