miracle bubbles wrote:Two weeks away and we know nothing.

At least we know it isn't Les Mort.

In a couple of occasions ThreeA had 3AA set info out earlier.
Especially via comments of Ashley on the forum.
But most years have had a spotty track record regarding official 3AA set info on the threeA Production Blog.

A first announcement was shown on January 4th, 2015

The first official info on the blog was on January 9th, 2015

1:1 NOM Pistol with individual Legionnaire's name engraved on it.
Let's do it right this year. 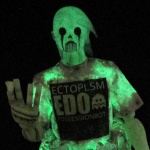 Wooly wrote:1:1 NOM Pistol with individual Legionnaire's name engraved on it.
Let's do it right this year.

Add the entire get up as well.

I am kind ok for this.

Wooly wrote:1:1 NOM Pistol with individual Legionnaire's name engraved on it.
Let's do it right this year.

I would love to have 1:1 NOM pistol in my collection

but if it's true then probably I can't renew my membership, coz I will get the problem at customs later, and lucky enough if they didn't accuse me as terrorist, lol.

As cool as that would be, and trust me..I'm all for that kind of prop/toy..it would cause major problems for some people. Could be a cool "kit" maybe we could all put together though. I piece with each new WWR fig.

TK Hunter would be hard to refuse. I can't see it happening though unless it's the only thing in the box.

I would like a simple card/tshirt/discount package- last two(possibly three) member packs are sitting complete and untouched other than the removable of card and shirt...
Unless it's mindbendingly cool,I'm likely out if forced to buy a set of items I really don't want nor want the trouble of storing,selling or shipping...

Yeah, I don't see where this package is going if it isn't Les Mortesque.  I just hope it isn't Le Mortis.  Don't tell me it's going to be a statue either or a maquette.  That would completely suck.  I don't know.  I really don't know where 3A is going these days.

I don't want to spoil the fun but I really like the concept of the yearly 3AAssociate packs.
And after the 2012 3AA F-Legion set  for US$180, all 3AA membership packs were undeniable pretty exceptional and had an incredible value. 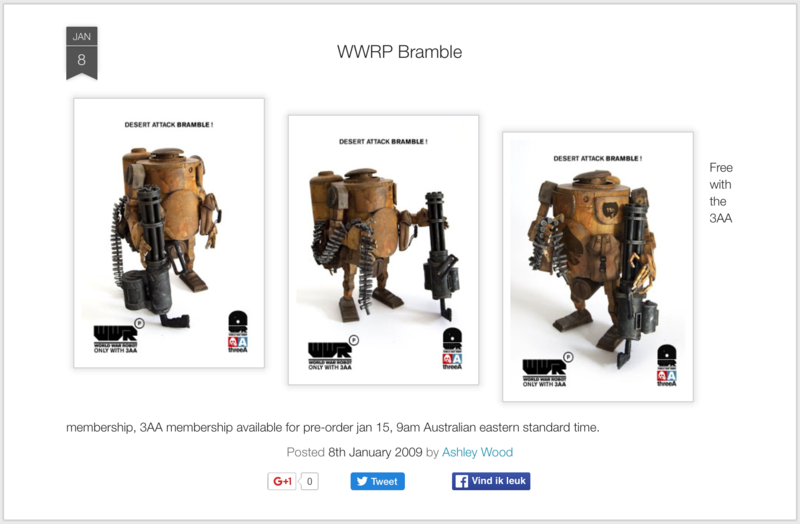 And how the design of the free Bramble changed between announcement and production.
8" was an estimate or typo, back then it got discussed a bit and shrugged off.

Blanc Hunter was probably my favourite, it's between Blanc & F-legion but the other sets have been just alright.
We could do with some hints or teasers any day now.

Skipper11x wrote:We could do with some hints or teasers any day now.

Interesting to note Tt for 1st 4 years membership consist of action portable, follow by 2 years of 1/6 scale n last year was
3AGO. Won't be surprise if this year is 3ago again, just not sure the figure chosen.

Unless 3ago demand is not up to 3A expectation and they decide to go slow on it. Best way to kick the the dirty deeds Bertie series is to make Bertie no.4 a 3AA membership pack. That will be great.

Still on the fence until reveal. I can tell you it sure would be nice not to spend the $200.

After collecting 3A for almost 5 years now, I'm pretty much bursting at the seams with toys still in boxes, might be a good time to reassess.

Too bad you can't split a membership...
There was what felt like very little opportunity to use the discount this year for me,as many sales were for items I didn't/don't collect. WWR and AK is what I was here for-and they have slowed to a trickle...That's fine and all,but say so-Let a brotha know!
The option is holding out hope another year that these lines again get going and dole out 200+ dollars for a box of items that go nowhere....
I would love a giant bothead- the one that has already been molded and used for the loper ninja - hell,give it to me blank- THAT would excite me,even if it's already been made( I was broke during that sale and that head is probably the coolest thing you've made in years,IMO). Or at least think of putting them up on BAMBA for a minute...

how about no teases and no blurry pics just tell us what the set will be, christ.

If I end up getting membership and you don't Crem I'll try and help you out when I can if need be. We'll see though. I'm on the fence myself. Hopefully it's a cool 1/6 scale figure that's reasonably priced as other past memberships.

Oh, has anyone postulated that it may be the Punk King? Or has that been ruled out?

Hopeful for some details today perhaps? Don't leave us hangin'