Very nice gar, that is two awesome pieces there. Just a little jelly

Chivo wrote:Very nice!  What's your assessment, gar on this nom compared to the originals?

The new guy on the left sports the tightest joints I've ever encountered on a 1/6th body.
Maybe I am a bit more focused on it since Nom de Plume is notoriously floppy.
(only have threeA so I am not sure what other companies have to offer)
Build quality is phenomenal.
Tightest de Plume to date.

Boots are the "standard" threeA boots.
Cargo pants are cargo pants, whitish streaks are a bit too much imho, but not too annoying. It looks a bit tighter than the 2008 versions.
Long sleeve shirt is a tighter cut, almost old school non fitting.
Pretty clean hardly weathered figure (compared to Grunts, etc.), Almost just like the 2008 Nom de Plume, which was a bit dusty.
Pouches are looking and feeling great. nice oily shine. It is about the same as the original thick quality, but it looks much better, probably due to the better, thighter tailoring.
Huge improvement over the thinner heavy weatherd ones found on the Fallen. Gives it a real old school feel.
Due to tight joints everything looks a bit nicer and more casually poseable.
Flaps with velcro on the holster and cargo pants hardly stay closed. Nothing new, I think that's a de Plume feature.

On a side note love the fact threeA used foam instead of wire to keep the figure in its place in the packaging.
Gives it a more premium feel, although you still have to cut the wrapped sticker open.

Through the years I missed out on a couple single hose Nom (de Plumes) and Final Fight hasn't arrived yet,
but as far as my objectivity reaches, this is the most solid figure yet.
Not my favourite though, that's still Blanc de Plume.

Notice the taller slim body below, it's a very noticeable difference.

Side by side he looks like a huge improvement, very Niiiice!!!

Nice! Thanks for the photos and info, gar. Can't wait to get mine.

He's definitely cool, but not really a fan of the neatly sewn on sleeves! I prefer the way final fight noms are done! Actually! The OG is the best, love those big stitches on the long sleeve! I always just thought it was a nice little detail IMO..

OG will always be the best. That's where it all began.

Just got notification on 7174 should have him on the 18th!

Same, but the 19th supposedly

Same, but mine arrived last Friday

Anyone manage to get the square. Do post pictures please if you are the blessed one ????

Maybe this could be an indication that you are one of the 10 "choosen ones" that get an expanded box with a Square?

Because all Noms that arrived yet, haven`t got any Square, so maybe the late ones are packed later with the additional Square?

I still wondering how they put the square, because there's no space inside box and shipper box.

Perhaps they will just use a slightly larger shipping box with enough room for a smaller box or package for the square? I'm kind of curious about this now too.

I'm in tracking limbo on mine, waiting for it to enter Canada Post. Don't think it should take too long though.

no, coz my friend just received his, and there's totally no room for square in art box and shipper box, and until now I think around 20-30% buyer already received them, but nobody got any squares, for ratio 1:10, that's suspicious, are they forgot to put?

People are posting photos on Facebook. Still no square pics but there is a cut out in the foam behind the nom that the square could fit in. You have to take the nom out to see it. 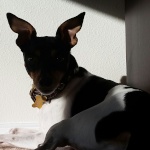 I have the box here.
Nothing fits there.
The cut out is for the pouches on the back of Nom and about 5mm 10mm deep.

[edit]
Checked, it's a bit deeper.

cool, thanks for the clarification

Saw the pics on Facebook and it seemed legit. This makes more sense! Thanks Gregory!

Nice to see a few of you guys scored 7174 Nom! I missed out, not through lack of trying though! Win some, you lose some..... Looking forward to final fight turning up, he shouldn't be to far behind 7174 I'd think!?