Man, am I the only one waiting for FiFi???  Hopefully he arrives this week or at the very latest by the end of this month.

I got mine on Saturday. I hope you get yours soon enough..

Im still waiting on mine Chivo. Hope it arrives this week.

NOM landed today! Box was perfect..which is a good surprise...fig is excellent. We need home runs like this everytime!

Nice, Olb!  Still waiting on mine.

fuck dude, this is kinda weird that you still haven't got yours yet. Hope fifi comes soon!!!!!! did you get any updates at least?

Just checked tracking, deru. Hopefully should be here some time this week.

ooohhh, i cant wait for you to be in awe like the rest of us. Its really cool to finally own a iconic fig since i started collecting like what, almost 2 years now? wow time flies by..

Hey guys, I’m new here.
Loving the new FF Nom!! Wanted to make special mention to the new foam packaging inside the box. Really made opening this Nom feel like it was on another level!
Great job!

Yep. 3A definitely needs to keep up with this foam packing. Keeps the figure in place and prevents any damage during transit.

Yo chivo. Did you get FiFi yet?

Aw yeah, deru. Finally got FiFi a day earlier than estimated. The red is actually nice. And joints are tight. Just waiting until I have time to take some pictures.

Congratz Civo! Great to hear you finally got your FIFI save and tight!

Alright Chivo!!! OG NOMs in the house Legion-wide! Good to hear.
Shoot I need to get some pictures up as well. I'll race ya.

Dude I have a 3yr old,... and I'm old. Busy and tired is all I do.
But more pics of NOM are incoming, first one to it owes the other a beer.

(I don't mind owing you a beer lol)

This figure seriously brought a big rush of 3A nostalgia and joy to my collection. Very happy with this move & happy for everyone who got any of the three versions. All winners.

And yep, you can't go wrong with any of these one hosers.

Been some time since we talk Nom! Ash recently mentioned on instagram that there’s an important Nom coming soon! I’m wondering if it’s the female Nom he teased awhile back!

I'm up for a new Nom so long as the configuration of the gas tanks is done right. I hope they stick to the OG configuration and just come up with a new colorway or completely come up with a new configuration that works and we don't have to worry about the tanks flailing about loosely like Von Nom or Sombre's. I think the configurations that worked were the OG Noms and the ones like Nom 4th, Blanc Hunter, and Nom di Sciple; in other words the side bags. They should try a chest tank kind of like the Chirico Cuvie figure, yet somehow firmly secured to the chest. Anyway, if they do a female Nom, hopefully it's more battle practical and less fashion/"heel"-istic.

If it's a female NOM anything like mother supreme then I'm definitely out. I don't mind the new tanks, Von has hooks on his sweater to attach the tanks onto, I cut a tiny slice in the jacket and threaded the tanks onto the sweater hooks, looks/works so much better. After that it's all down to the price.

<{OjO}> wrote:Been some time since we talk Nom! Ash recently mentioned on instagram that there’s an important Nom coming soon! I’m wondering if it’s the female Nom he teased awhile back!

Good point, completely forgot about her for some reason.
A battle ready female Nom character with army boots would be great.
But I am open to anything new.
_________________
alles sal reg kom

Old NOM/Commanders figures can wear trench coats. It is more limited attaching tanks to the coat/shirt. If the tanks had backpack straps might be another option.

The tanks definitely need some type of backpack/side bag/secure-harness that would make them practical in the real world.

Just one hose attached to a hip tank.
Done. 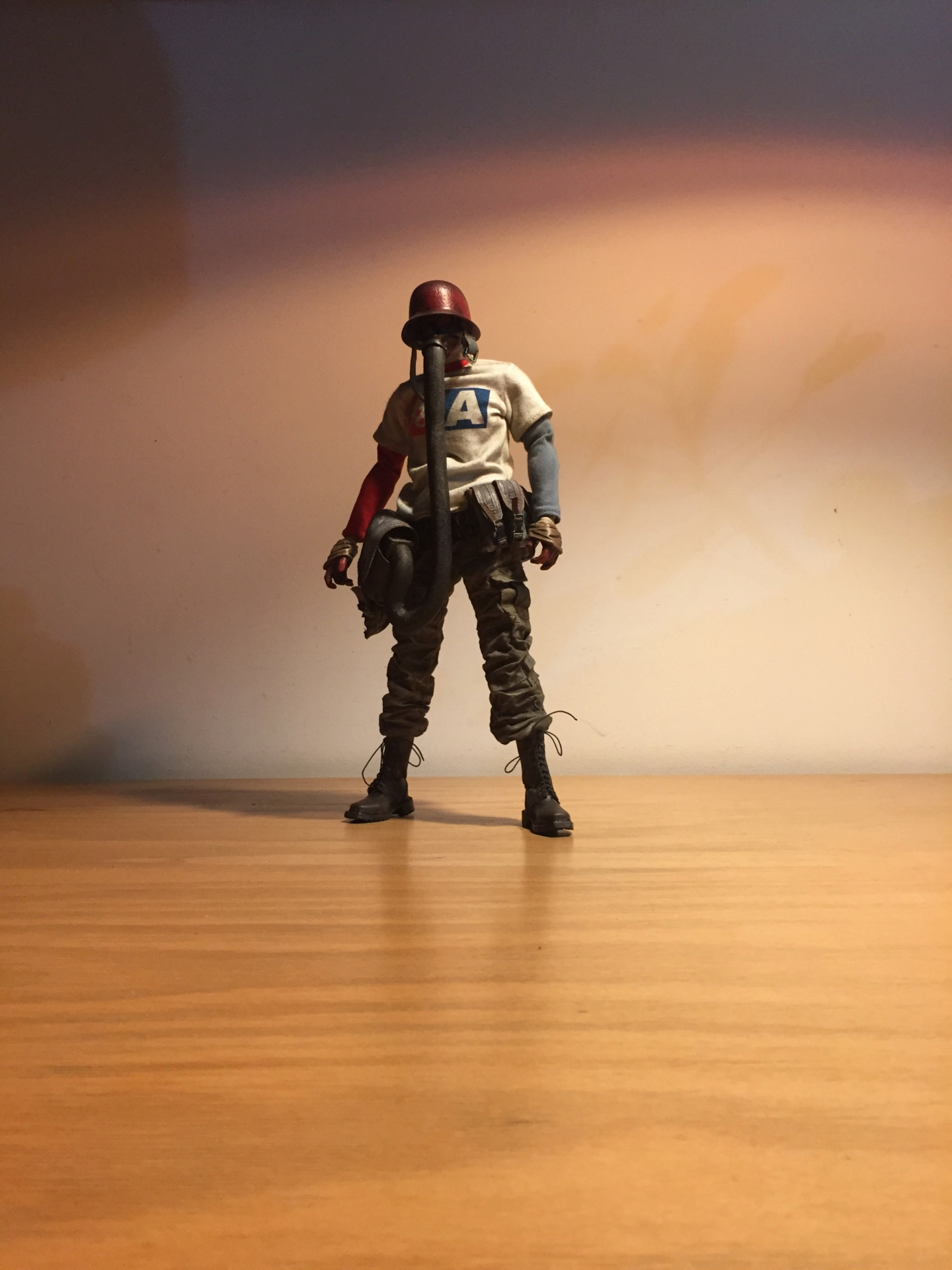